Isola Issues Cease and Desist Notification, Files for Injunction in R.O.C. Against TUC

“Isola, and its predecessors, have always had a history of product innovation. The patent on filled material is just one of several innovations that have demonstrated Isola’s commitment to being the leader in technology. Our strategy is very simple, innovate and then protect our investment,” stated Ray Sharpe, CEO of Isola Group.

Legislative changes have restricted the use of lead in electronics for environmental and health reasons prompting original equipment manufacturers, as well as contract manufacturers, PCB fabricators and material suppliers, to design PCBs that use new lead-free alloys. These new alloys, however, have the drawback of requiring higher assembly temperatures in the range of 20-40 C higher than previous lead-containing PCBs.

This transition to lead-free materials has required prepreg and laminate manufacturers such as Isola to develop new base materials that can withstand the necessary high assembly temperatures. Isola became a pioneer in this area by developing base materials that used phenolic-cured resin chemistry. Isola held a patent on this technology until it expired in 2003. While the phenolic-cured chemistry solved the higher assembly temperature problem, new problems arose, including the problem of thermal expansion that is associated with the thermal cycling of newly developed PCBs.

To avoid the problems of thermal expansion, resin based PCBs and the base materials (prepregs and laminates) used to fabricate the PCBs need to have a low z-axis coefficient of expansion so that the differential stresses in the plated through holes and interconnects between the copper and the base material can be reduced, thus reducing circuit failures.

“To address the thermal expansion problem, Isola’s research team pioneered the development of another class of “industry standard” high performance base materials. Such materials include Isola’s 370HR, 250HR, IS400, IS420 and DE104i laminate and prepreg products that use an inorganic filler, covered by the patent/s,” stated Tarun Amla, Vice President and Chief Technology Officer, Isola. 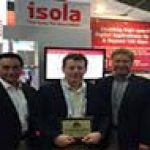 CHANDLER, ARIZONA, November 30, 2004 – Isola Group today reported that sales increased for the three-month period ending September 30, 2004 by 19% versus prior year. Sales of high performance products grew significantly from the prior year and are expected to grow at a 50% annual rate over the next…
Learn More 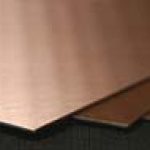 Chandler, Arizona, June 30, 2004 — Isola Corp. today announced the launch of IS415, the next generation high-Tg product for Telecom and Broadband applications. The product addresses the emerging need for combined thermal reliability with signal integrity. IS415 has a Tg of 190 Deg C, and the DK / DF…
Learn More