Thermomechanical Analysis, commonly referred to as TMA, measures finite changes in the height of a sample as it undergoes a change in temperature.

The precise measuring system of the TMA is made up of a Linear Variable Differential Transformer or LVDT and a quartz sample stage and probe. Quartz is selected as the material for the stage and the probe based on its very low expansion rates. The LVDT detects changes in the position of the probe within 0.5 nm or 0.0000005 mm. A force of 0.5 N is applied to the probe. Less than the weight of a bee sitting on the sample, this force is enough to ensure the probe remains in contact with the sample, yet small enough to not affect the changes in the height of the sample.

A calibration process measures the expansion o fan aluminum standard under the applied force using the quartz probe ensuring that the change in the probe position that is reported is the change in the sample height isolated from all instrument effects.

Sudden changes in sample height indicate a separation of internal layers at the point of delamination. Measuring the amount of time a sample withstands exposure to a specific temperature of interest provides insight into a material’s ability to withstand the temperatures necessary to produce a printed wiring board.

Measurement of the coefficient of thermal expansion (CTE), glass transition temperature (Tg) and time to delamination at a temperature (Td) of interest by TMA provides valuable data for the design of printed wiring boards. 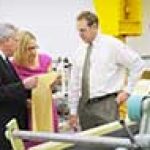 Chandler, March 24, 2003 — Isola Laminate Systems Corporation, the U.S. subsidiary of Isola AG, broke ground on its new Technology Center in Chandler Arizona last week. The new development facility is expected to open in August 2003 and will facilitate an increase in the speed of new product development…
Learn More 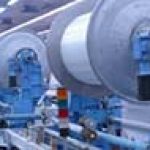 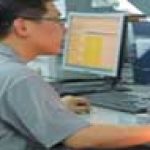 Isola Laminate Systems Corporation, the U.S. subsidiary of Isola AG, has inaugurated their new R and D Center and Analytical Lab in the United States. We are very pleased that despite adverse market conditions, Isola can continue to invest in the development and commercialization of new products and technologies, notably…
Learn More
Top